Erik Elvgren is an experienced animator and producer who works at the University of Virginia. He is behind the creation of “The Adventures of Cavman”, a short pre-produced video package on the big stadium’s big screen that shows Virginia’s football mascot in a virtual battle with the opposing team’s mascot, as a way to get the crowd riled up before the teams take the field. ‘I get kids come up to me all the time and say, “Hey, I love Cavman. It was great.” And that’s really rewarding to know’, explains Erik in a recent interview. ‘It’s a lot of work, but it’s fun’.

UV Video Services has been producing the “Adventures” for a few years and these videos have become as much a part of the pregame tradition at Scott Stadium as the Cavaliers themselves taking the field.We asked Erik to explain how these videos are produced and what technology they use. ‘We have an 8-camera STT motion capture system which we acquired in 2008’, he explains. The system provides real-time motion tracking which is then used to animate the virtual Cavman character. ‘We create show opens where our mascot battles the opposing team mascots. These air on stadium Video boards (American Football and sometimes Basketball).’

Optical mocap technology clearly boosts the quality and efficiency of character animation, but not all the systems available in the market perform equally well. ‘I like the large capture volume with this camera setting – my system does a circle that is about 20 feet in diameter. The data quality is excellent. I have seen some other systems and the foot accuracy on my system is far better. I use Motion Builder to clean data and in just a few minutes I can get very good results with just a little smooth translation to remove some small jitter. This lets me maintain the performance and really takes hardly any time’. 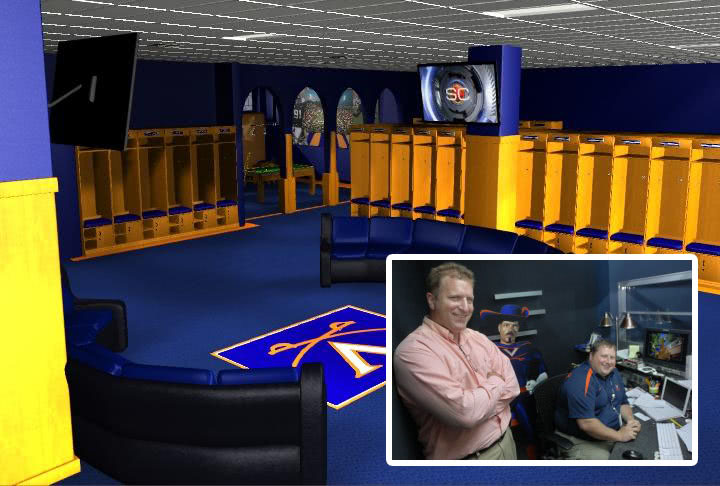 When asked about technical assistance, he states that ‘the STT support staff was very helpful. They would connect into my computer using TeamViewer and would find the problems. Because STT is in Spain we planned to do our trouble shooting in the mornings here in Virginia because of the time difference. But the technicians stayed late to help me when I know it was probably late there’.

The way they set up the system was pretty flexible: ‘We essentially made a wooden square and mounted the tripod head to a block on the bottom of it. Then we mounted a clamp to the top of the square where we attached to ceiling grid so it could hang and have tilt adjust if needed. I have a pipe ceiling grid we made to hang the cameras but since my space gets used as a press room I do not have it all plugged in. What we do is leave the cameras mounted in the ceiling, and then when we need to use the system we roll in the portable case (photo attached) and a laptop. Then we drop the cables down from the ceiling, plug in the laptop and start it up!’.